It’s been a while since I’ve posted anything about our day-to-day happenings and I really feel I’d like to do that more often.  Maybe I’m just feeling nostalgic, but the kids are growing up right before my eyes and I know too well how easy it will be to forget all the little things.

We recently divided up our house chores again (I like to go through them with the kids once a year or so and redistribute as they get older.)  It was neat to see how excited they all were about picking out their own chores (normally, I pick for them) and funny to see who chose what.  Bundle and Shmooey took the bulk of the mundane chores (laundry, trash, sweeping, etc.) while Bunchkin took the things she wanted to keep “just-so” (the bulk of her new responsibilities take place in the kitchen, which is a big job here!)  Bitty took all the outdoor chores she could and nothing at all indoors, except the cooking.  Several months ago, she asked if she could be in charge of ALL of our cooking.  To say I was skeptical that she could handle it is a severe understatement (she was 9 at the time,) but I told her we’d try and she’s been amazing!  She loves it and is looking forward to being in charge of the garden and planning meals from the yard next year.

We’re still trying to get the animals settled in with their new arrangements… we worked on fencing this morning before it got too hot, and are trying to work out a new rotational grazing system for everyone.  As of now, we’re tying the bucks out along the fence rows, but we can’t tie all the does out every day, so I have to figure out an electric fence solution for them.

As much as I love having goats, I have to say that everything everyone warned me about with them seems to be true for us.  I’m convinced that every other livestock animal in the universe is easier to keep than goats.  They require five strand electric (cows need one,) they can’t get wet (sheep and cow’s don’t care,) can’t handle cold weather, can’t handle hot weather, get worms incredibly easily, climb (and destroy) their shelters, poop in (and destroy) their feeders, have very specific caloric and mineral needs and are the pickiest eaters on the farm (whoever said goats eat anything obviously never had goats!)  Every time I think I have things all worked out for them, they do something else to set us back again.  I have friends who have sworn they will never have another goat on their property, and I’m beginning to see why!  But maybe the worst things about them are also the best things about them.  In a personal-growth sort of way maybe it’s good to have something around that frequently gives me the opportunity to give thanks in all situations and regularly grows my somewhat thin supply of patience!

As for the other animals, we’ve got a bull lined up for our cow (a friend with Jerseys is setting up a hot date,) have almost finished a new chicken tractor and have two alpaca’s coming to join us on our farm!  We were originally looking for a llama to keep as a guard animal, but llamas are about as common as unicorns in our area, and a friend told me about these two, who have shown some good guarding tendencies in the past.  Plus, we were able to trade goats for them so we figured it’s worth a shot!  I’m pretty excited about them because, for one thing, they rate right up there with bunny rabbits and baby lambs in the cuteness factor, and for another they’ll give us wool.  Since we’re not yet ready for sheep (sigh,) I figure alpacas are the next best thing.  And did I mention how cute they are??? 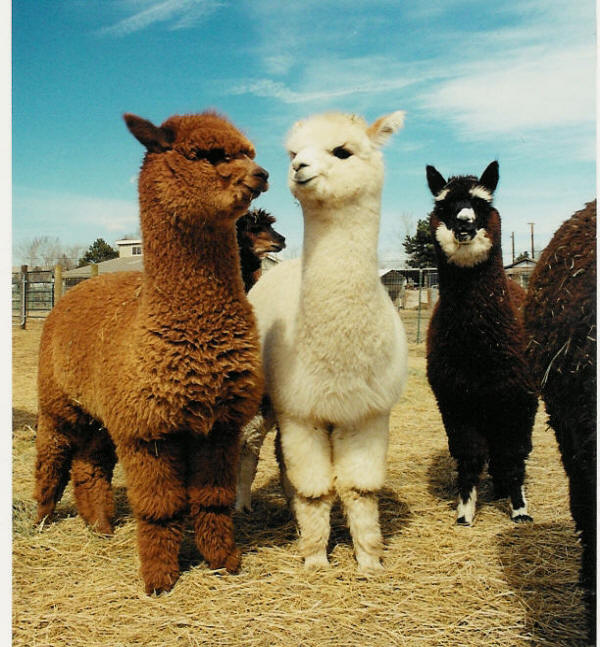 We’ll continue to look for a llama, but I’m awfully excited about having these guys, too!

The boys have been fixing and tinkering with everything they can get their hands on, and Shmooey is planning to take the money he’s been saving for months to buy a broken lawn mower, so that he can learn how to fix it.  Today he fixed a few chairs that needed repair and he and his brother have plans to make a spinning wheel for me to practice on, until I can borrow one from my midwife and eventually buy my own.  The girls and I are really looking forward to that, we’d like to learn to spin and knit – it would be so amazing to make something so completely from scratch that way!

In the meantime, the girls have been saving for their own soap making supplies and are finally ready to make soap!  I’m looking forward to the entire house smelling like lavender and patchouli and ylang ylang!  And goats milk soap is sooooo nice… they’d like to sell it, so we’ll be setting up an etsy shop soon!

Speaking of selling things, just today I got an order for some pictures that is going to enable me to buy something for my husband that he’s wanted for a very, very long time!  He’s actually saved up the money many, many times only to have to use it for other things again and again so this time, the kids and I sat down to ask God to help us get it for him for his birthday, and just today the order came through!  We’re so excited about it!  I know I’ve said it before, but we are SO thankful for the amazing people who allow us to share precious moments with their families, and in doing so, help to support ours!  This gift is a super-big secret, so if you happen to know my husband personally, please don’t ask him how he liked his birthday present (it’s a ways off, yet!)

In a nutshell, that’s what’s been going on around here lately!  I look forward to writing more often in the future.

Repeat after me (er…. you): it’s not time for wool sheep